I got another display case a few months ago which brought up the perennial problem of what should I put in it. I live pretty near the ocean so my choices for meteorites to display is always limited. Thus, I have mostly NWA,s and a few other stones out for viewing. They are interesting but not really valuable. I have one case devoted to materials from Barringer Meteorite Crater, and tektites. My decision eventually was to display some of my impact materials in the new case. These rocks have mostly been hidden in boxes for years.

A nice feature of collecting impact crater specimens is that they require no protection from the environment. I went through the boxes and picked out some especially nice material. When I was done I found that I had selected specimens from sixteen different craters. I won’t bore you with all the details or pictures of each. But, here are just a few photos.

I have had a longtime interest in the Zhamanshin Crater. There are many different materials to be found at this location. Very glassy rocks and very porous materials and everything in between was produced in this significant impact event. Small irghizites reminiscent of Wabar pearls are also found. It is this diversity of forms that make this an especially interesting crater for me. Pictured below are two of my favorite pieces. First is an 866.25 gram chunk of some of the more dense impact melt. It is not nearly as glassy as much that is found and not nearly as light and porous as some. It is ribboned with glass, yet preserves much of the original mineral texture. It has a grainy appearance but a very glassy feel. It is covered with lichen that I am not ever going to remove. It adds something to the piece an extra bit of naturalness.

The second Zhamanshin specimen offered for your viewing is a very different type. It is light in color. It is a 265.2 gram piece that is mostly vesicular glass. Yet it is not totally porous as much of the commonly seen material from Zhamanshin. It has bands of solid glass running through it as well. Many of the bubbles have filaments of glass bridging across them. Something that reminds of the Variety B glassy material from Barringer. There is a very pronounced layering in this specimen also that shows folding. 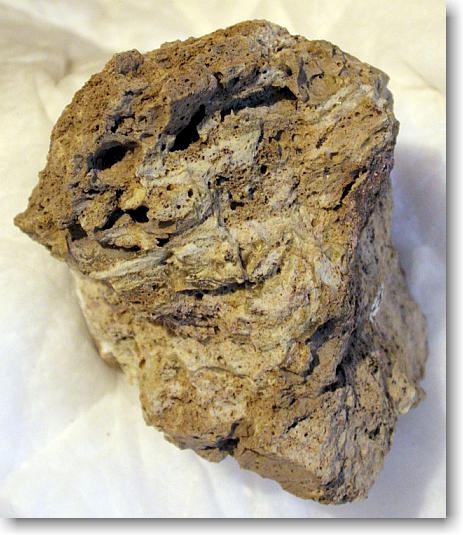 Another crater that has a wealth of varied materials is the Ries Crater of Germany. Once again there is very glassy material and everything down the line to the impact breccias. It is one of these breccias that I offer next. Like Zhamanshin the event was large enough to envolve a variety of different target rocks. Some of the impact melt is light greenish gray with ribbons of black glass running through it. That type of Suevite while very interesting, at this moment to me is not as exciting as the beautiful sliced chunk of red impact melt pictured next. It has an almost artificial color. The clasts of other rocks incorporated into the matrix of this material are often visibly altered. They commonly have a fine banded structure or a fine salt and pepper structure. There is almost always some dark glass in this material as well. All these features can be seen in this specimen. 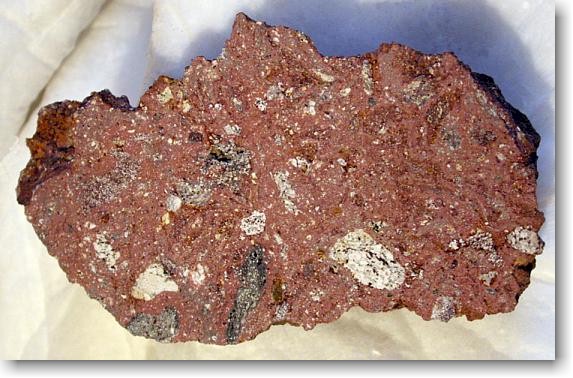 One of the things that happens with impacts is that they strike rocks that are fossiliferous. This is part of what makes the Alamo Breccia (I have written about this material before) so interesting. Ries Crater is one of these events. When the impactor slammed into the rocks they already contained fossils. These fossils were hit by the powerful shock waves and they s

uffered some fascinating damage. The following photo is of a shocked belemite from Ries and an unshocked one from another location nearby. The fossil appears to have been hit and displaced and then recrystallized so that it remains a single piece with many steps.

Impact rocks can provide a wonderful additional area for the collector. They can also provide some insight into the true power and destructive force of cratering events. In many cases you will not have specimens of the impactor itself. But for me the rocks created by impacts provide enjoyment enough in themselves.