Rather regularly the discussion of tektite determination reappears. This month I thought I would attempt to present some of the striking differences that can be easily seen between tektite glass and natural glasses of volcanic origin.

Tektites are most often in my experience confused with volcanic glasses. There are several reasons for this. Most of us are familiar with man-made glass. When it is seen broken in the wild there are usually telltale indicators that it is not natural. Shape, contour, color and even mold markings take them out of the arena of worry. On the other hand obsidians can look externally like some tektite types. They experience many of the same processes in the environment as the true tektite. Their surface marking are often very close to the cup and groove markings of splashform tektites.

There seems to be no lack of individuals that wish to offer obsidians to the consumer as objects with special even magical properties. I have several times been told that small obsidians are from Meteor Crater. I have been told that there is a layer of lavender colored glass in Utah that is part of a crater and that I can buy as much as I want for way more than obsidian prices. 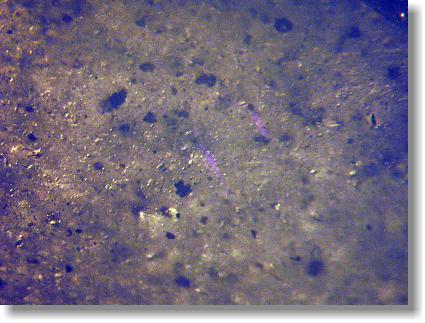 So what are the basic characteristics of these two native glasses? Obsidian is volcanic. It can be a variety of colors but in a thin sliver will often show a gray color. It will often be cloudy and have fine specks of black through it, as seen in this photograph. These are sparsely disseminated grains of magnetite and ferromagnesian minerals. Though it has a curved fracture and generally is lustrous, I personally see a poorer luster than that of either man-made glass or tektite glass. Most obsidians will have a pitch like luster and have therefore been called pitchstone. 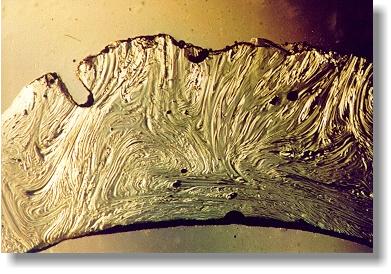 Tektite glass has essentially no residual mineral matter in it and is completely amorphous. Splashform tektite glass in thin sliver or slice will not be cloudy but clear though very colored. It will show swirls, which indicate mixing in a plastic state. As seen in the accompanying picture of a slice of moldavite. It contains a small amount of its volume as bubbles. It has a high luster on freshly broken surfaces. Tektite glass comes in a variety of colors however; grays are not among them. Generally, yellow and brown, can be seen in slivers becoming opaque black quickly with thickness of specimen. Green is seen in both Georgiaite and Moldavite tektite glass with some Moldavite trending over into blue green. Tektite surface marking are often pit shaped depressions as well as grooves. Though some exhibit a spiky and deeply grooved appearance. Many splashform tektites will have a bald spot on their surface where the amount of marking is noticeably reduced.

With this as a very basic discussion of their characteristics let us move on to how to distinguish true tektite glass from ordinary obsidian.

Obsidian being a volcanic glass has a great volume of trapped gases and water. Obsidian flows in nature will sometimes be capped by pumice. We can utilize the fact that pumice is obsidian froth to test obsidian for its trapped volatiles. Since true tektite glass is exceedingly dry and free of volatiles it reacts very different to heating. Obsidians will always in my experience become pumice when even gently heated in an oxy-acetylene flame. After the visual tests and the microscopic examination has shown them to be obsidian they will always offer the further proof by transforming themselves to pumice.

Tektite glass however, will never froth in a flame. It will for that matter never really even slump under its own weight when heated white hot. It will when heated do nothing all the way to white hot. After cooling tektite glass will show a characteristic gunmetal colored flash on the surface, and a very bright smooth bubble free luster. It will also almost without exception shatter within hours of doing the test. This is from the thermal stress changes that the test has introduced.

I should at this point say that I did not invent this test. It is a test that goes back to the very beginnings of tektite investigation. It has been a simple diagnostic test for obsidians purported to be tektites for a long time.

So how does this work on a practical level?

We receive samples regularly from individuals who believe that they have discovered a vast new "layer" or "deposit" of tektites. I ask for a sample, which they are always happy to provide since they have found several pounds with ease. When the two or three small specimens arrive, often marked type one and type two or even type three, (Since they think they have found several different types in the same area. Often stating different geological ages for the various types.) I make a careful visual examination of the specimens. This will almost always reveal its color through some thin area. If not a chip is taken off to determine the color of the glass. The specimen is then placed under the microscope to examine it for residual specks of minerals. I check its luster and fracture. Usually this can all be done in a moment since the piece will often show some ancient fracturing. Then it is off to the torch. I am already sure of its nature, but fair is fair and the flame test is very revealing.

So far I have received a perfect record of obsidians, no one has yet sent me an Arizona tektite or Utah tektite, or Nevada tektite. I enjoy receiving the specimens and doing the testing. What I don’t enjoy so much is the response from the sender when they are told that it is not a tektite. They know of course that I am wrong and will wait for more testing to prove it. It is not too much different than what happens with people who think they have found a meteorite.

Here are some pictures of both tektite glasses and obsidians that have been through the flame test. I had not done any testing on Columbianites until preparing this article. I have included a picture of the Columbianite. It failed like obsidian. It had the beautiful lavender color and the clear transparency that make them quite collectable. But it frothed up just like a volcanic glass.

Photograph 1 shows a tektite on the left and California obsidian on the right. Number two shows two pieces of Arizona obsidian purported to be tektite glass of two different types. Shot number 3 is a slice of Columbianite before heating. Picture 4 is the same slice of Columbianite after failing the flame test. A comparison slice of melted Indochinite tektite glass is shown in photograph 5.

Till next month, jpt