Since my previous two articles were about craters (Panamint Valley and Elko Crater Field), I suppose you could call this installment "Craters - Part 3". But unlike the previous two craters, which I proposed were subsidence features, this article's crater appears to be an impact feature. Although this one is a micro-crater, at least it has a distinct rim. But what makes this feature remarkable is that it is on the surface of a small, stony-iron meteorite. And not any stony-iron meteorite, but a recent Glorieta Mountain find!

A Glorieta Mountain "Siderite" with a Rimmed Crater (?) 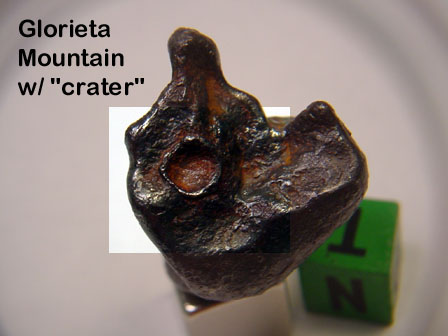 So, the question that begs to be answered is, "Was this "micro-crater" formed by a micro-meteoroid?"
Normally meteoroids, after they fall to earth and become meteorites, don't retain the evidence of prior impacts with micro-meteoroids. In most cases the process of becoming a meteorite results in the ablation of a large percentage of the exterior of the original meteoroid. But we still have a very good idea of what craters formed by micrometeoroids look like when the Space Shuttle brought back the Long Duration Exposure Facility (LDEF) from Earth orbit.

This raises the question of whether an oriented meteorite can retain some of the original meteoroid's exterior, complete with micro-meteoroid impact craters? I have seen on some oriented meteorites, such as LA 002, that the aft-end was nearly fusion crust-free and that only those exposed mineral grains with sharp edges and corners showed any effect from the heat generated during the ablation of the leading-end, or nose-cone. This being the case, I could easily accept that an iron-rimmed micro-meteoroid crater could more likely survive ablation on the aft-end of an oriented siderite. But before we entertain that possiblility, why not evoke a more plausible explanation, such as:
1) plucking of solitary crystals or other inclusions, or
2) the bubbling-up of those more volatile inclusions when they reached their boiling point (by being close to the surface being ablated), but only erupting immediately AFTER ablation ceased, or
3) isn't it more likely that some man-made projectile, like a shotgun pellet, produced this "crater"? But would a bullet or pellet travel with enough velocity to produce this kind of crater? 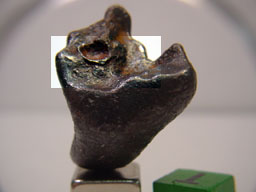 In this particular case, it doesn't look like an oxide-encrusted, weathered meteorite that has been "shot at". If it was, then it would have formed a rim of metal oxide. But metal oxide is not malleable enough to do that. The rim has the appearance of having been metal when it was formed and then subsequently having been oxidized. In other words, the crater and the rim doesn't appear to be a more freshly formed feature. The crater and the rim appear to be as equally oxidized as the entire exterior of the siderite.
New specimens with craters will need to be found, or additional evidence will need to be obtained, before this mystery can be solved.
This specimen was examined by John Wasson and others at UCLA, and although he was convinced that this feature was a crater, PROVING what produced this "crater" would be extremely difficult. Nevertheless, he found the feature to be remarkable, and possibly of some interest to other researchers specializing in this field.

A Glorieta Mountain Pallasite with a "Pseudo-Crater" 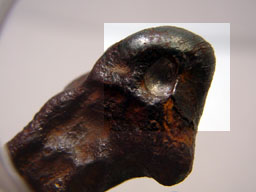 Sometimes the surface of a stony-iron meteorite can form a pseudo-crater when an olivine crystal is plucked, or a sulfide nodule is gouged out, during the process of ablation, and just prior to the quenching of the fusion crust. In the case of Glorieta Mountain pallasites, the typically large olivine crystals leave an obvious and angular vacancy with little or no rim. Even those Glorieta Mountain that are called "siderites" have been found to contain small olivine crystals. And of those that I have had the recent opportunity to examine, many of them exhibit numerous flow-lines in the fusion crust, which in some instances lipped up and onto an olivine grain, but never were any of them fully encircled by a flow line. So, even if this grain were to be subsequently "plucked", it wouldn't have a full 360 degree rim encircling its recently vacated "crater". Still posing a problem would be "what would keep the now exposed flow-line/rim from being ablated away?" And if you say that, "It was on the aft-end", then how could the original olivine grain been plucked in the beginning, if there is no ablation occuring on that surface? 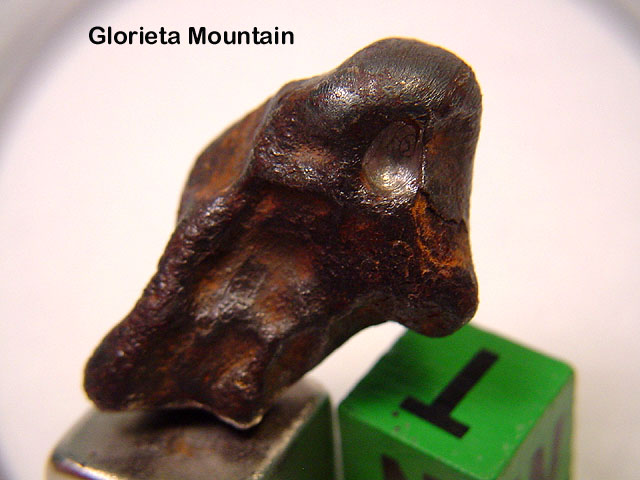 The above image is of a dolphin-shaped Glorieta Mountain individual, and is a good example of how the surface of a stony-iron meteorite can form a pseudo-crater when a phosphide or sulfide nodule is gouged out, during the process of ablation. The "enlarged image" clearly shows this pseudo-crater still containing shiny phosphide/sulfide minerals, remnants of an incomplete evacuation of what must have been, judging by the shape of the "crater", a small, oval nodule of schreibersite or troilite.

At Last - Large Slabs of a Gold Basin Area Meteorite

My first article this year was about the variety of meteorites found at the Gold Basin Area of Mohave County, Arizona. It would only be fitting to have in the last article of this year an update on these Gold Basin chondrites. As I mentioned in that earlier article, I've been looking for a broad slab of a large Gold Basin individual stone. It was my thought that close examination of a large slab might find evidence of brecciation, or at least, some kind of evidence that would reconcile the broad range of metamorphic grade and shock stage among individual stones found in the Gold Basin Area. Well, I have yet to see a slab of a Gold Basin with a large cross-sectional area. So, I took matters into my own hands, and cut up one of my own self-collected specimens. The following images are of that 800 gram stone: 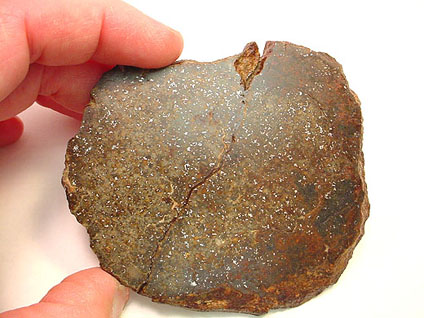 Still no evidence of brecciation. Certainly, NOT a very uniform pattern to the interior. But it's not as heterogeneous as it looks, at first sight. The variation in the pattern appears to be related to localized differences in weathering and staining of the groundmass. There appears to be a correlation between darker-stained matrix and areas with more fractures, but whether this is related to localized areas of higher stages of shock, has not been proven. Still to be determined is whether the darker areas have experienced sulfide staining or silicate darkening. 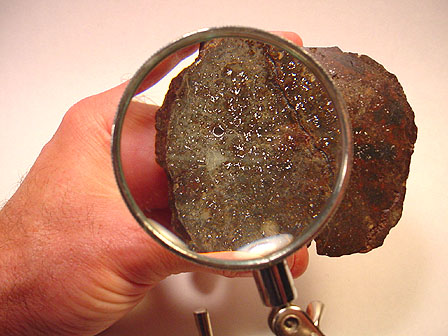 This stone has not been thin-sectioned or classified, yet. And I would not want to hazard a guess as to whether this is an "L4" or an "L6 Gold Basin". Mainly, because this determination is made at the microscopic level. And I'm not just talking about chondrules, but an even finer microscopic criteria for determining metamorphic grade. Many petrologist use the width of feldspar laths as their determining factor. If the feldspar lath is wider than 50 microns, then the metamorphic grade enters into the "6" range! If a thin section of this stone would show the feldspars being wider than 50 microns, then this stone would be considered as another one of those "Gold Basin (L6) meteorites".
I don't intend to pursue the investigation of these slabs, but if any researcher or collector would like to include them in their investigation or collection, these slabs are available (preferrably for trade). 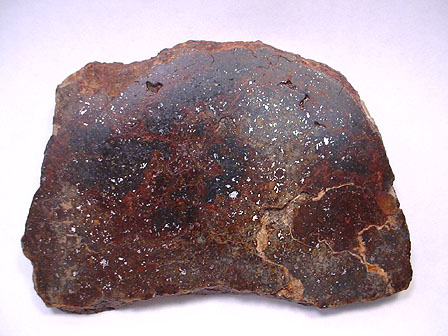 To see other examples of slabs from this, and other Gold Basin Area finds, "Click"... 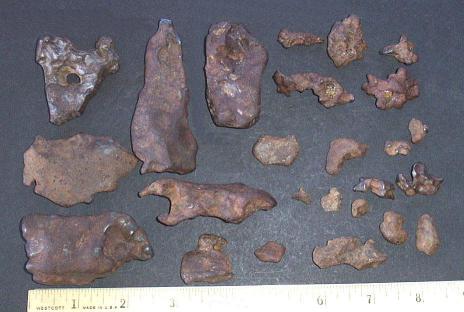 And here is the reason for the delay in my article getting finished... Just as I was writing the conclusion to this months article, I came into possession of a delivery of the latest batch of recent Glorieta Mountain pallasite finds!
As luck would have it, several of the specimens had evidence of micro-craters from impacts. But, this one particular specimen had a 1mm crater with a raised rim. But, what was significant about this impact, was that it cratered the front, or leading surface, of an oriented fragment! (See images below)

This was evidence that, at least for this particular fragment, these "micro-craters" formed after ablation ceased.
But what did these fragments impact while falling through the atmosphere?... 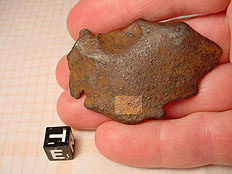 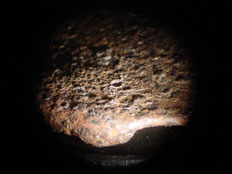 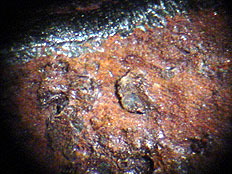 "Click" on the above images to ENLARGE!!
(Large files, please allow time for the images to download)

... well, I didn't dwell too long on this question, because I remembered something that Marv Killgore told me about a similar feature on one of his Sikhote-Alin finds! So, I got a copy of the abstract that he and J. McHone wrote back in 1998, to read what they thought produced these "micro-craters":

McHone and Killgore, in their 1998 abstract "SURFACE CRATERS ON SIKHOTE-ALIN IRONS; IMPACT PRODUCED" (*1*), concluded that:
"Local conditions during the Sikhote-Alin event included thousands of Fe projectiles infalling into an environment already populated with high-speed Fe and rock ejecta fragments from craters still being formed on the ground."

I would like to conclude this article by adding one more possible origin:
If you accept that some of the so-called "shrapnel" specimens of Sikhote-Alin could have formed during an aerial fragmentation event, then particles from that event could have struck lagging projectiles infalling through this debris plume, to produce the micro-cratered Sikhote-Alin specimens.
With regards to Glorieta Mountain, since there are no known impact craters associated with this fall, it would be necessary to invoke the later Sikhote-Alin scenario in order to explain these micro-cratered Glorieta Mountain specimens.
This would have implications in regards to the extent and shape of the actual distribution/dispersion ellipse for the Glorieta Mountain strewn field.

And of course, references in print:

Acknowlegements: Thanks to Piper R.W. Hollier for the review of an earlier version of this article.

For for more information, please contact me by email: Bolide*chaser http://www.meteorite-times.com/index_of_articles/index.htm