Back in January, I listed five New Year’s meteorite collecting resolutions. Now, the end of the year has arrived and I thought it would be good to revisit those resolutions.

Here are the resolutions again with my appraisal:

1. Be less concerned with price, and instead pay more attention to quality and opportunity.

I had no trouble with this resolution. Ignoring the price is easy; paying the bills is the hard part. I offer my November Accretion Desk as evidence that I gathered specimens with much more of a focus on opportunity than price (and sometimes with seemingly reckless abandon!). With many rarities, a choice in quality is not an option, but where there was a selection; I opted for the best that was available. I also did quite a bit of specimen upgrading as well as collection thinning. Even where I already had a nice piece of a particular locality, I still made the leap to an even better piece if it was a big step up. This was usually the case when the upgrade was a complete individual or museum-numbered specimen.

2. Focus more heavily on specimens of historical and scientific importance rather than trying to get one of everything.

Again, no problems here. It has been months since I last purchased a meteorite that was either not a witnessed fall, or documented in science or history. More than the Meteoritical Bulletin or the Catalogue, my guiding book has been Cosmic Debris by John Burke.

3. Document in my collection catalogue more about the history of each specimen in my collection. Not just the usual classification information, but also its journey through human hands including specimen numbers and cards.

In defense of myself, I have been keeping more detailed records, but I’ve yet to compile all that documentation into my collection catalogue.

4. Share my enthusiasm for meteorites with more people, and to offer more support for the beginning collector.

I consider success on this resolution given that I have helped many collectors acquire specimens that they have been searching for. So what if they were specimens I sold from my collection. I know many folks around the world are smiling when they open the packages I sent them.

Well, I succeeded at half this resolution. The yeart 2003 contained vastly fewer trips to eBay, but also almost no time through the eyepieces. I guess number 5 will be on my ’04 list as well.

But there were many bright spots in ’03 that were not on my list. Two were from H. H. Nininger himself. First, I received a copy of his autobiography Find a Falling Star inscribed to Chuck Lewis, formerly of Arizona State University’s Center for Meteorite Studies. Many years ago, I had the pleasure of spending the day with Chuck as he showed the ASU Meteorite Collection. He even gave me a few specimens to use in my teaching.

The inscription to Chuck from H. H. is a treasure, especially after reading the autobiography. 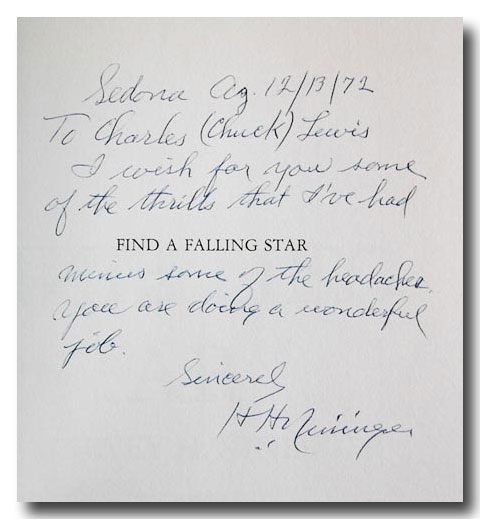 Another little Nininger treasure is a star covered with Canyon Diablo metallic spheroids. Nininger made a handful of these stars in two different sizes. Spheroids were glued to a star-shaped piece of aluminum. Then the spheroids were ground down till they shined like the gleaming metal they are. 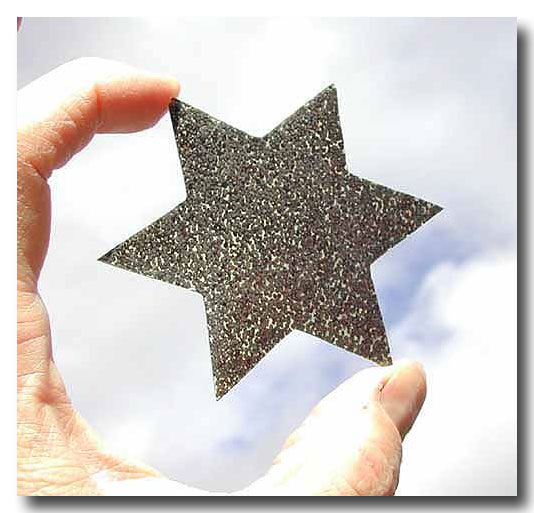 So, as 2003 winds down, I wish the best to all my meteorite friends, and May you too share some meteorite “thrills” in '04 as well.
Cheers!