Dominating the southeastern late night sky is the planet Mars. Surrounded by myths both ancient and modern, Mars has long held the fascination of mankind. Right now it is getting a little brighter everyday and its angular size is heading quickly toward a record. That makes this close approach a very tempting photo opportunity that Paul and I have found impossible to resist.

So we headed out for a weekend of digital imaging. But, in the back of our minds were thoughts of the long journeys that our Martian meteorites made to get to us. 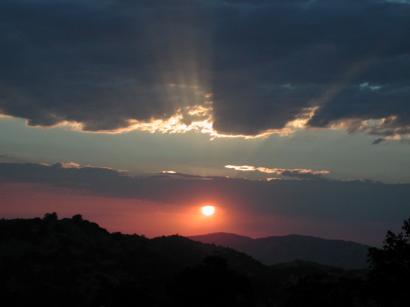 The meteorite harvests of the last few years have been really bountiful in meteorites from Mars. These wanderers however had no easy journey to Earth. They spent eons of time slowly working their way to our part of the solar system. Finally, each had a fateful encounter with our gravity and plunged down through the Earth’s atmosphere. Having found a few meteorites I have an appreciation for the magnitude of the challenge involved in recovering just a more normal meteorite. To have now, such a selection of planetary and lunar meteorites for study is truly remarkable.

I thought as a much younger man that I might live to see men walk on Mars. I had seen them walk on the Moon. Now as I consider the direction the space program has taken in the last thirty years I am aware it is likely; I shall never see broadcasts from the surface of Mars by men walking and working there. So, as Mars grows brighter and closer and positions itself ever earlier in the night sky, this is an important opportunity for me to view it as I never have before.

I will be pulling the telescope out many times in the next month, I hope. I will take more images, I hope. If nothing else over the next years I can sit at my computer and run the video recordings of Mars when it was really.

The following pictures are offered for you viewing enjoyment. 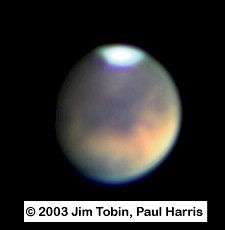 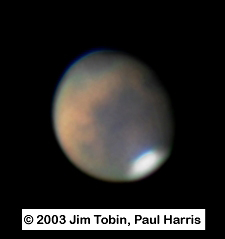 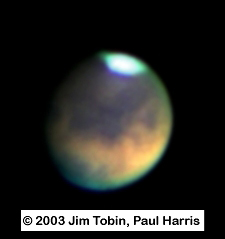 Some of the major classic structures seen for generations can be picked out in these images. They were taken as video and then filtered for best frames. The frames caught during the brief moments of good seeing. Those were then stacked in Registax.. There was some post-stacking enhancement of the images, but not really very much. We worked with short videos of from five hundred frames to twenty-five hundred frames. With the capture rate set at 5 frames per second some length of time was involved in the longer videos. It makes for a wonderfully relaxing time of viewing. There is no straining to position yourself at the eyepiece and guide the exposure. You simply watch the object on the computer screen in real time. 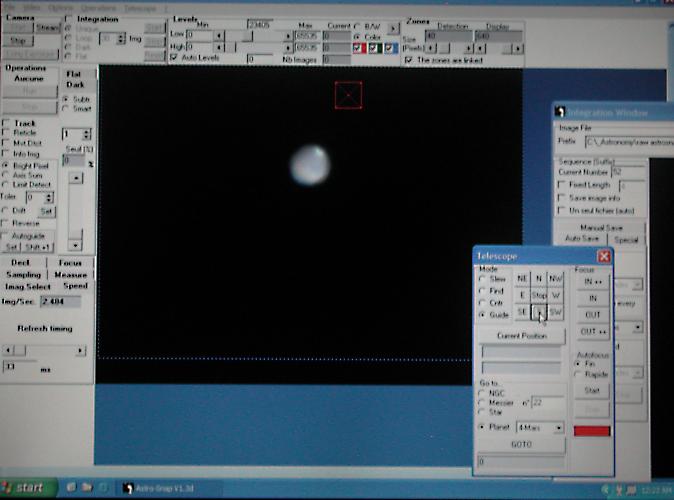 You know what the image scale will be on your finished pictures, and you know what to expect from the video. You can judge the amount of good and bad seeing on each capture. The hardest part is always arriving at the best focus for the system. But, even that is much simpler than a few years ago. One benefit of going with someone else is that they can help by calling out "better", "better", "worse" while you are pushing the autofouser button. And there are pixel-counting algorithms that will let you know when you have reached the smallest size image on a test star. We had plenty of time as we waited for Mars to rise so we looked at some other things; we imaged Albeiro, which made a nice shot. We hunted for Uranus and Neptune. They proved to be too faint and elusive for the video camera, but the hunt was fun none-the-less.

I am sure that most of the planetariums in the world will be holding Mars observing sessions. I would heartily recommend that everyone take this opportunity to see our neighbor while it is close. At roughly 34.6 million miles it is just around the corner in galactic terms. And as we wait for probes to land there in a few months, we can remember when we saw it like never before.

Next month I will have something a little more meteoritic to write about, but Mars is the bright spot literally right now.