My Top 10 Favorite Display Pieces in the Meteorite Exhibit at the Smithsonian' s National Museum of Natural History.

For the inaugural issue of The Meteorite Times back in April of 2002, I wrote about the Meteorite Display in the Smithsonian's National Museum of Natural History in Washington, DC. In July of this year, I once again had the pleasure of spending the day with the meteorites in the public display. The exhibit, even with its flaws, easily ranks as one of the world’s greatest, if not the greatest meteorite display. And the sheer number, size and quality of meteorites presented is a humbling experience to any meteorite collector. The main masses read as a who’s-who of some of the most famous meteorites in history, and every time I visit the meteorites I see something I never noticed before, again increasing my respect for this collection. It is as if the collection is a living organism so well put together with the display pieces chosen with such inspiration that as my knowledge and interest in meteorites grows, the display is always there to show me the finer points of what has only recently captured my attention.

But still there are my old friends with whom I spend time any chance I get including Cumberland Falls, Bencubbin, and the Tucson Ring among others. For this month’s Accretion Desk, I have decided to share my Top 10 Favorites display specimens in the Smithsonian’s Public Display. While I reserve the right to change my mind in the future, for now the specimens pictured below are the ones I spend the most time gazing at. For your viewing pleasure and inspiration, here is my list. 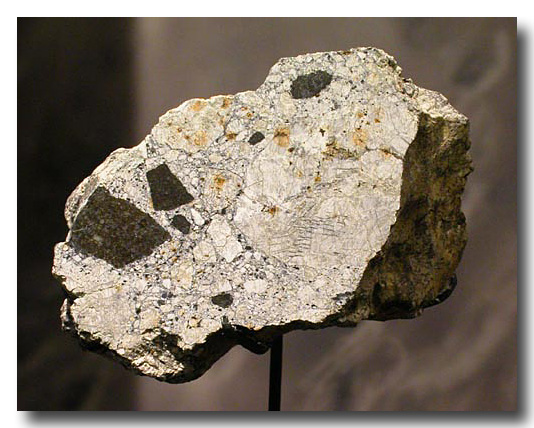 Cumberland Falls
I am just as impressed with the preparation of this specimen as I am with the specimen itself. Cumberland Falls is one of my favorite meteorites anyway, but to see a large end section with what I believe is the best polishing work in the world still takes my breath away. I once told Tim McCoy about how impressed I was with the polished face on a meteorite as fragile as Cumberland Falls. He just smiled and said that they (the scientists at the Smithsonian) have been at it for long time and know what they are doing. No kidding! 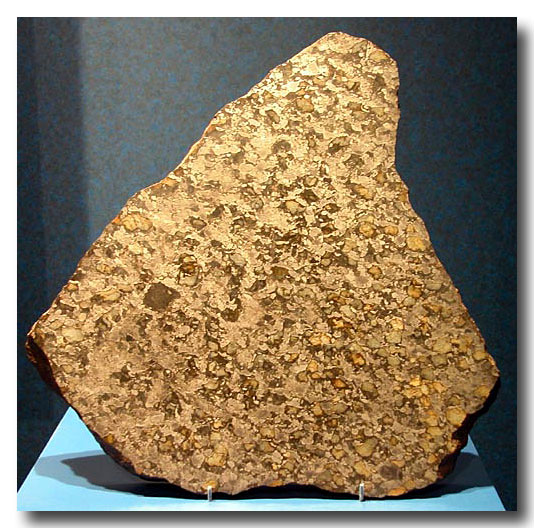 Bencubbin
Still identified in the display as a “Stony-iron, ungrouped” Bencubbin, no matter what it is, it’s a real head-turner. The metal seems to flow in gentle droplets down the face of this meteorite like nothing else. And, of course, the immense size of this display piece gives a heavy dose of reality to just how well small pieces of Bencubbin found in private meteorite collections constrict one’s ability to fully appreciate this meteorite. 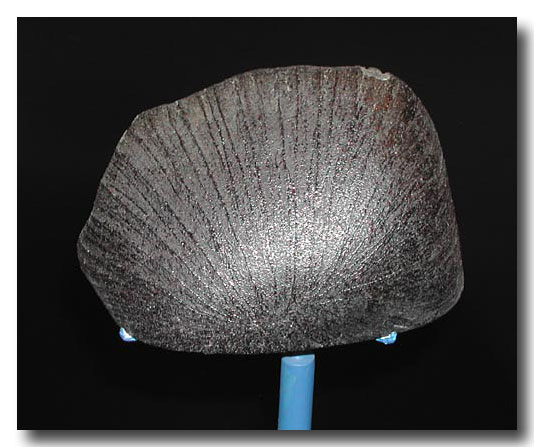 Lafayette
Never mind that this is a SNC, Lafayette is simply the most gracefully oriented meteorite I have ever seen. While its form is not the most creative in the world, its perfection is found in the laser-etched flowlines streaking radially across the most ridiculously shiny black surface ever to cover a meteorite. This amazing piece of cosmic art is so perfect that I often wonder it really is Lafayette or a retouched supermodel stand-in. 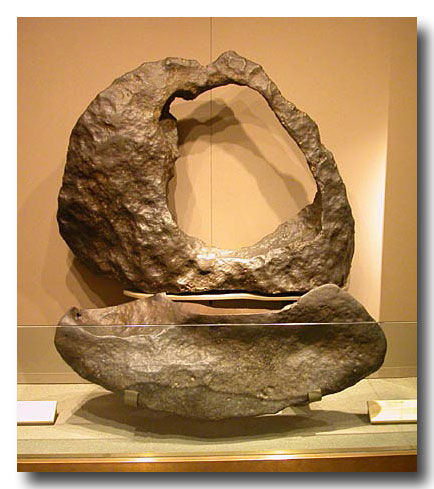 Tucson Ring and the Carleton Mass
For some reason, the minds at the Smithsonian thought this otherworldly creature is in better company with riff-raff like the Hope Diamond and the world’s largest perfect crystal ball. Whatever. To me, a visit to the museum is never complete until I wrap my hands around the Tucson Ring. While hardly looking like a meteorite, there is no doubt that the Ring is the stuff of legends. 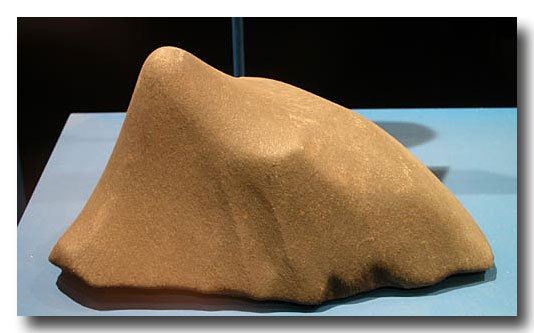 Archie
Although I cannot explain it, the soft contours of Archie give me hope for the future. Even the most violent and aggressive forces of atmospheric flight blasting away stone and metal can leave the gentle curves of a baby’s bottom. Archie is beyond orientation. It is a gift from space to show humans that while born of violent collision deep in the recesses of the asteroid belt, the earth, in its acceptance of the stone, melted away the harshness leaving only a docile, peaceful form offering comfort to our children. 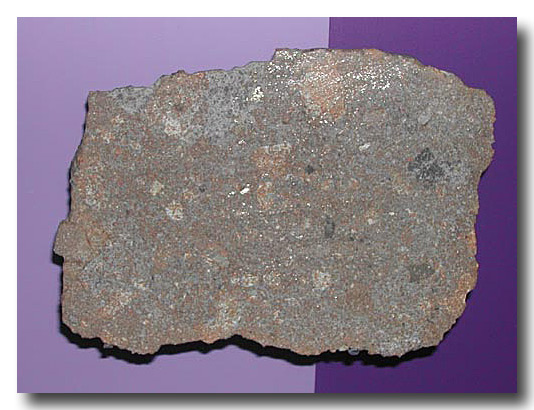 Weston
Regardless of the accuracy of Thomas Jefferson’s quote, this Yankee Professor from Idaho who believes that stones do indeed fall from the heavens is especially fond of Weston. The fall of Weston is the intersection of meteorite science and the history of the United States. Every country has its meteorite stories to tell, and for my country the story begins with Weston. 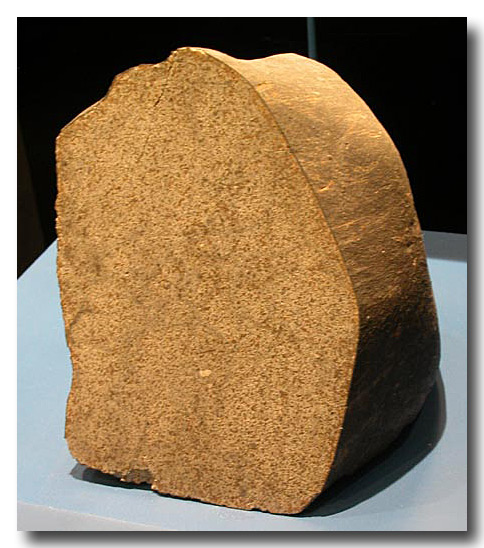 Lost City
Lost City is arguably the most expensive meteorite in the world because it took a consorted effort of mining the night sky with cameras for over a decade just to find this meteorite. It is also a blackened chunk of astronomical history adding one more important piece of evidence to the puzzle of where meteorites came from. Something we all take for granted today. 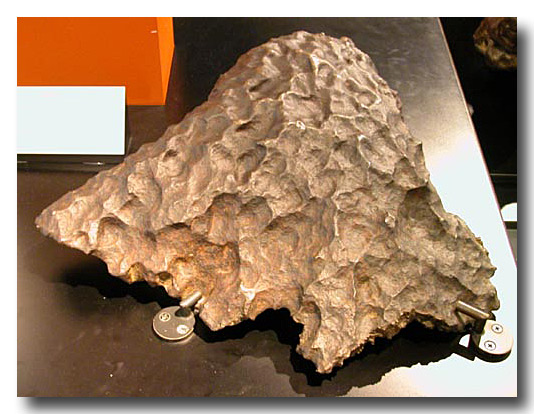 Oakley, Idaho
With Oakley, I’m lucky in two ways. First it is always nice to see a representative from one’s home state in a national museum. And second, Oakley is one of the best oriented iron meteorites on display in one of the best collections on earth. The bat-wing form of Oakley is undoubtedly from a stable flight into the sandy ground of southern Idaho. The iron ablated away creating a fluid taper at the trailing edge making me think this lovely specimen glided into our atmosphere like a bird on wing. I only wish Oakley was not bolted down. I’m sure it could use a hug from someone who knows its homeland well. Washington, DC is a big city, and the Smithsonian can be a scary place for those of us used to wide open spaces and quite afternoons in the sun. 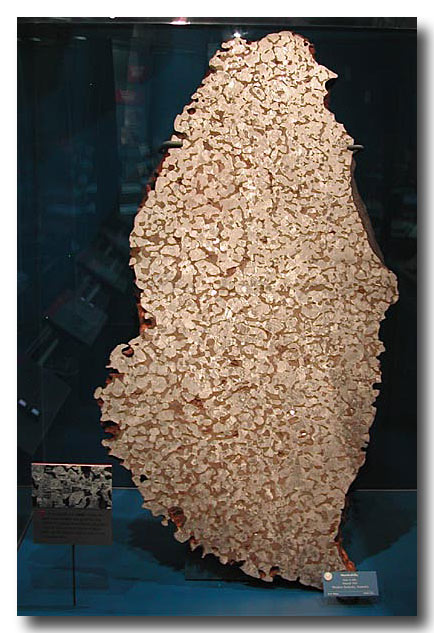 Mundrabilla
This slice of Mundrabilla stares you in the face meeting you on your own terms of stature. It is slices like this one that make my personal meteorite collecting seem futile. The gargantuan face of this iron is enough to launch a thousand dissertations, and there is so much science going on here that measured in utter excitement, this closet-door of a slice has fewer peers on this planet than I have fingers on one hand. 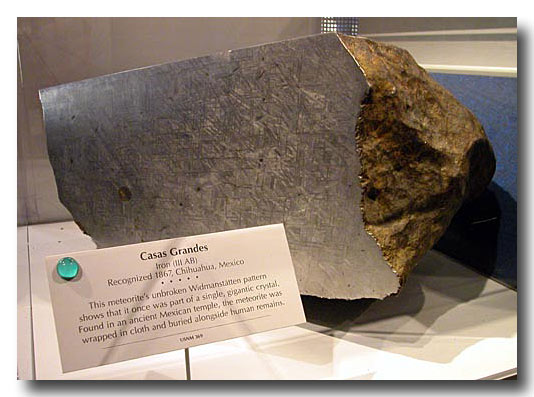 Casas Grandes
Even in the enlightened days in which we live, I can still imagine why the ancients in Mexico wrapped this meteorite in cloth for burial with their loved ones. Casas Grandes is a beautiful example of an iron made more beautiful by its history. Although the ancients never lived to learn that Casas Grandes contains an unbroken Widmanstatten pattern indicating it was part of a single, gigantic crystal, they did know enough to prepare it as best they could for a journey into the future.


Finally, there are a couple runner-ups that are worth a special visit. 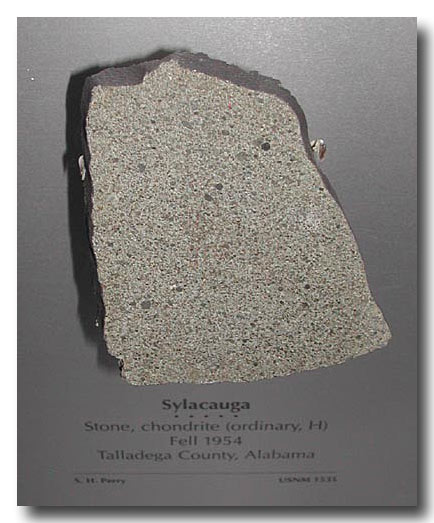 Sylacauga
Sylacauga needs no introduction. Pick up almost any book on meteorites and you will soon read of poor Ann Hodges who in 1954 when asleep on her couch was rudely introduced to an eight and half pound H4 chondrite. Shaken and bruised, and unknowing it at the time, the 32-year-old housewife just solidified her place in history. Because of the Sylacauga meteorite's encounter with Mrs. Hodges, Sylacauga is one of the few meteorites listed in the Guinness Book of World Records. 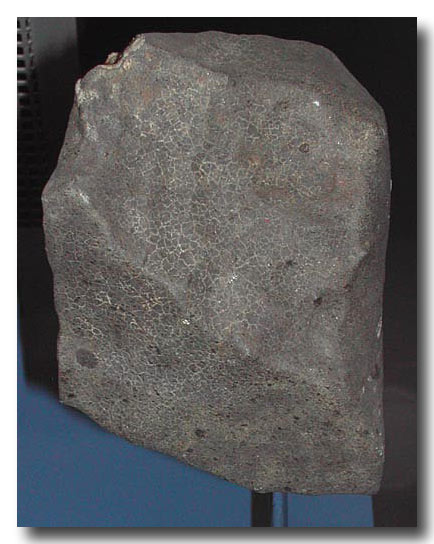 New Concord
Another bio-impactor, New Concord while falling under the influence (of gravity) is accused in the beating death of a horse. The specimen on display is a beautiful example of both a complete stone covered with contraction cracks, but also another piece of US history. Falling just one year before the US Civil War, this cosmic cannonball is another fine piece of Americana worthy of a special look.


Limiting a world-class meteorite collection to just 10 specimens is an exercise in futility. However, having visited the Smithsonian display many times over the past decade or so, I do find that, etched in my memory, are some striking images of meteorites; meteorites that had an impact on me while I wandered the display. There are dozens of other worthy recipients of my top 10 choices, but in the interest of space, I had to draw the lines somewhere. Or did I? I used a digital camera during my most recent visit allowing me to stroll through the exhibit with about 900 available images on my 1GB compact flash card. I actually have images of every single part of the entire display, and should I ever find the time, I would like to construct an Internet presence for the display. But for now, 10 images (12 actually) will have to do.