I have had a very meteorite rich month. In preparation for the recent Tektite Party that we had I spent a couple few weekends cutting and lapping a variety of meteorites. In the end it turned out to be about a hundred and twenty five slices, plus numerous end pieces. It was a lot of work but fun also. More than anything it is always a great learning time. I have the opportunity to see just about everything that is inside an entire stone as it is cut. One slice very often does not reveal all that is going on with a particular specimen.

Among the group of stones were some real beauties. There were four LL’s, a CR2, an R3.8, an H3.8, and a L5 that was so wonderfully brecciated that it had just about everything including the kitchen sink; meteoritically speaking, in it. What a treat to get to work on so much diversity.

Often my cutting will be the preparing of a few dozen micros and macros of some nice but quickly unexciting large stone. After lapping a few hundred surfaces on at least three different disks to get from saw marks to 600 or 1200 grit even I am bored. But, there were no such thoughts this month. The material was neat stuff and I mixed the large routine specimens up with the small and rare. The effect was to keep me always just on the edge of panic about how the next one would go. As it turned out I cut some of the thinnest slices of the rare that I ever have. I was surprised, I broken not one slice of any of the stones.

I need to get a new blade though, for the first time in more than thirty years of using diamond saws I wore out the metal of a blade. The rim of diamond is still very good and would cut more stone. The thin metal of the blade itself is gone in spots however. I noticed light shinning through a hole about 1/16th of an inch in diameter right behind the diamond-covered rim. Turning the blade by hand revealed a few other holes.

In between cutting meteorites, I cut slices of the Alamo Breccia and polished them. That’s always fun. It is a really beautiful impact breccia and one that takes a high polish.

I was a little shocked when I got over to Paul’s house before the party and saw all the little boxes laid out on tables. I had been running slices over to him in small batches for several weeks so he could make labels and put some up on the web. I lost track I guess of how many there were. We put out some nice tektites of course and some LDG. Guests always like to examine the cut and polished pieces of Muong Nong Layered Tektite so we put out a few of those also. 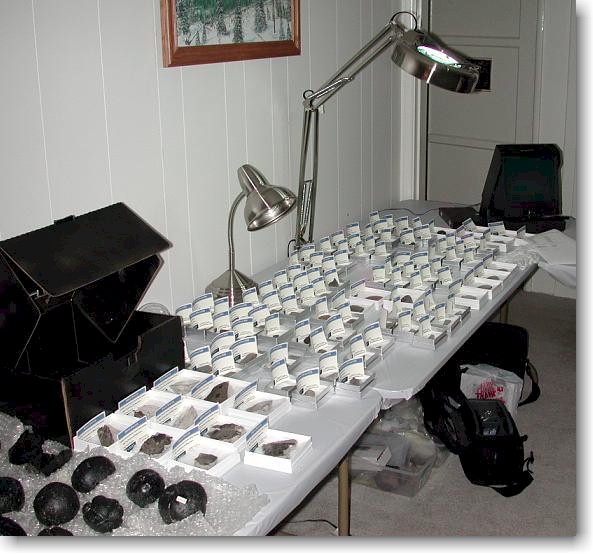 In the past my polarized thin section viewer has run low on battery power before the end of the party so I made up a cable and got an external battery to support its internal supply. Usually, several guests bring slides to show and discuss. While I had it out working on it I looked at several slides and took some pictures. Below are a few of the shots with descriptions.

It was great to see everyone at the party and to relax and talk. We had a really good view of an Iridium flare; Jupiter and Saturn were very nicely seen in Paul’s scope. It was (I think) one of the best parties we’ve had. I am already looking forward to the next. But, before that there will be other meteorite events and gatherings and friends to share time with. What a great community we have. Till next month

This first chondrule would at first glance seem to be an ordinary barred olivine chondrule. But, if you look carefully it appears to be two chondrules in one. On the right upper area can be seen an outer ring of a smaller barred chondrule within the overall barred chondrule.

This second photograph is of another barred chondrule.But this on has some interesting things going on with it as well. There are

areas that are almost porphyritic within it. Notice off to the right the fragment of a more normal barred chondrule.

This next chondrule is a porphyritic type with quite interesting shaped crystals.

This last one for this month is of a radial chondrule. 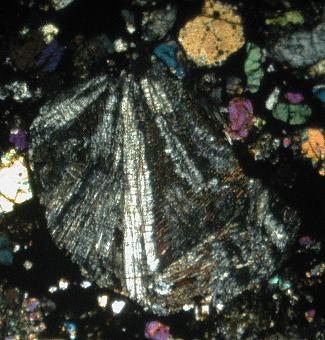 I could go on putting up pictures but, this page would take forever to load. So I will save some for another time.